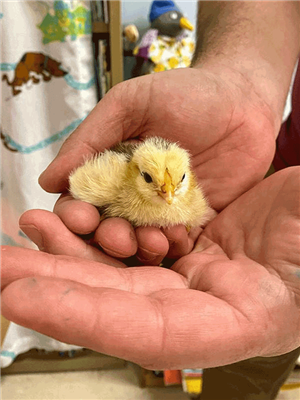 The first graders at Pequenakonck Elementary School have some noisy new classmates.

“When we came in this morning, there was a chirping noise. We were screaming because we were so happy that one of our chicks hatched,” said Grace Magnotta.

“It was the tiniest egg!” said Sonny Castelli. “We thought it wouldn’t hatch because it was so small, but we were so happy that it did!”

A dozen chicken eggs have been incubating in each of the first-grade classrooms for three weeks. The students passed the long wait by rotating the eggs three times a day, journaling and diagraming the changes in embryo development, and studying the life cycle of a chicken.

After returning from recess on Tuesday, Samantha Farrell’s class watched a timelapse video of their second chick hatching. The room erupted into cheers as the chick emerged from its shell.