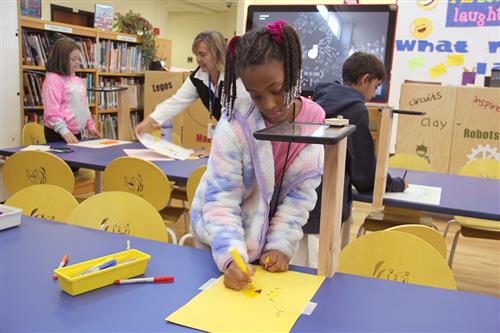 The day’s challenge at the voluntary lunchtime program for third through fifth graders was creating a simple stop-motion animation to represent each student using plastic letter magnets and markers.

“I’m going to draw a chicken, because we used to have chickens and I still like them,” said Dante, while his classmate James said, “I’m going to write music, because music is the best!”

The students spread out across the elementary school library, where each table had a basic movie studio setup using an iPad for a camera combined with a stop motion animation application. Enrichment specialist Dr. Michelle Sands and library media specialist Natalie Koehler created wooden stands to stabilize the tablets and sized the backdrop paper so students could visualize precisely what was in the video frame.

“Animations are a series of pictures. I’m starting with all of the letters scrambled, then I make one small change,” said Koehler as she nudged a plastic letter a half-inch over on her miniature movie set, “and I take a picture. Now I’ll make another small change and take another picture. Using just these letters and combining it with drawing to elaborate the idea, I’ll create a gif.”

By using software to compile and playback the series of photographs, inanimate objects will appear to move across the screen and drawings appear like magic.

“I was surprised that it was actually easy,” said Alyson as she excitedly showed off her pink bunny animation. “At one point the marker was in the picture and then in other parts my hand was in the picture, but I redid it.” She is already planning a new story to tell with playdough at the next Genius Hour.

A’Mani likes making stop-motion movies because it doesn’t trigger her stage fright. “I want my friends to try Genius Hour too, because I think it’s really fun, like an adventure.”

“We decided to do gifs because it is a project that you can accomplish in an hour,” said Koehler. “Our goal is to eventually make longer movies, so starting with a gif gives an opportunity to learn the stop motion techniques.”

Get your popcorn ready, there may be a student film festival in the future.