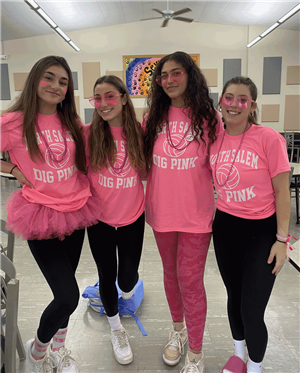 This is the first time North Salem has won this prestigious award. The NYSPHSAA Student-Athlete Advisory Committee (SAAC) selected North Salem's volleyball team during its recent meeting at the SAAC Summit held in Syracuse, NY.

A long-standing tradition of the North Salem volleyball team has been to work with the Side-Out Foundation to raise money and awareness for breast cancer. Gigi LeClair, a senior on the team, took charge of this initiative, leading and organizing events to help raise funds. The team rallied other sports teams to host "Pink Out" games, partnered with local businesses, and held a car wash fundraiser at the Croton Falls fire station.

LeClair tragically lost her mother to breast cancer when she was 13, which motivated her to take the lead on this community project. The North Salem volleyball team ultimately raised over $19,000 for the Side-Out Foundation and its Dig Pink Program.

"This fundraiser's foundation was built on love and the joy of helping others," said LeClair. "Our very small town had a very big impact. Thank you to my team, the staff that helped, and the people who have gotten up every day and fought. My only wish is to remember the people we have lost and use their memory to power our project further."

"The North Salem Volleyball team could not be more honored to receive the award," said Toni Fiore, North Salem volleyball head coach. "It was truly an incredible effort for such an important cause. The team worked so earnestly to be able to say it helped those individuals and families fighting metastatic breast cancer. We received so much support from the community and are so thankful for their efforts in helping us reach and surpass our goal."

The North Salem project was selected from 179 community service projects submitted for consideration through the Team Up 4 Community platform. More than 8,000 NYSPHSAA student-athletes donated over 128,000 hours to a community service project this fall. Those hours resulted in $198,748 raised for charitable causes. The NYSPHSAA Community Service Challenge has been in existence since 2011.

"The Community Service Challenge is a great program that showcases the positive impact student-athletes can have within their communities," said Dr. Robert Zayas, NYSPHSAA Executive Director. "We could not be prouder to recognize North Salem's girls volleyball team for their commitment and dedication to such a worthy cause."